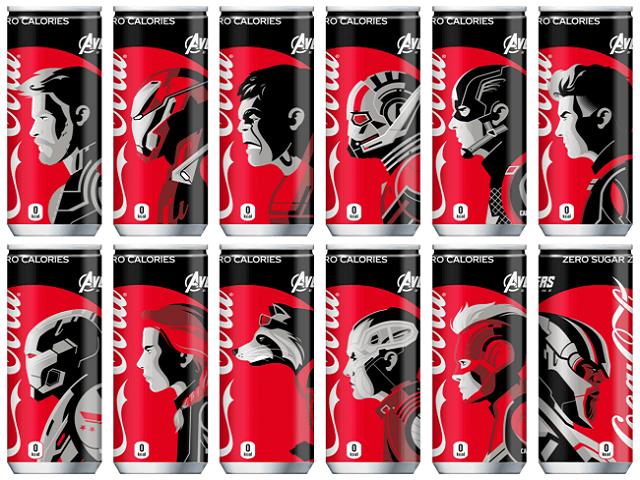 It's no mystery that Japan loves to churn out limited-edition products and pop-up events to celebrate pop culture or promote special campaigns. Typically, most collaborations for pop-culture tends to be anime or idol focused. However, given the global success of the Marvel Cinematic Universe and how much people around the world love Coca-Cola, the two companies are teaming up for an exclusive line of Coke Zero Cans featuring the characters from Avengers Endgame. The heroes are here to do whatever it takes to help you quench your thirst.

Showcasing the remaining heroes (and villain) from the tragic events of Infinity War, the new Coke Zero cans are decked out in black, red, and white to match the company's motif. From top left on the image to the right is: Thor, Iron Man, Hulk, Ant Man, Captain America, Hawkeye, and on the bottom from the left features: War Machine, Black Widow, Rocket, Nebula, Captain Marvel, and the mad titan Thanos. Interestingly, while all heroes face the left, Thanos is the only profile facing right.

Although movies typically release in Japan later than they do in the United States and the rest of the world, Endgame will premier in Japan around the same time as the rest of the world. Even better, these cans will go on sale from April 1st. Stock up on your favorite heroes, or collect the set of 12 to make your own display.

If you're joining Japan Deluxe Tours during the last week of April, you may not catch Endgame in theaters but you can at least bring back an awesome memento of your Japan Tour before watching on of 2019's most anticipated superhero movies!