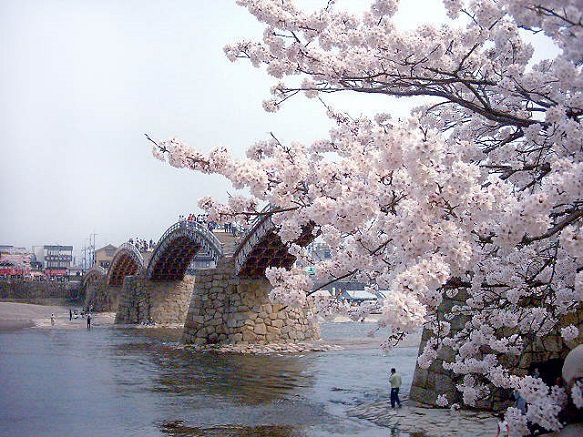 The Kintai Bridge is a stunning arch bridge in the city of Iwakuni, in the Yamaguchi Prefecture, Japan. Often considered Iwakuni's most distinguished landmark, the bridge was built after the bridges for Iwakuni Castle faced numerous destruction due to floods. Completed in 1673, the bridge was well-known for its distinguished series of five wooden arches. While various flooding caused damage, the bridge was able to remain intact until 1950 when typhoon "Kijia" washed the bridge away. Due to the lasting effects of World War Two, the local government could not focus attention to repairing landmarks. Instead, the local townspeople worked together to preserve and reconstruct the bridge to be as close as the original as possible. The bridge was completed in 1953 and received some restoration and reconstruction between 2001 and 2004 to maintain all five arcs. Although the bridge has faced destruction over the centuries, the beauty of the bridge earned a spot as a "national treasure" of Japan in 1922 and continues to be the pride of Iwakuni.

See the bridge for yourself at the end of our Nikkei Ancestry Japan Tours in Yamaguchi. Customize your vacation with this spot and more during an unforgettable time through Japan's best cities and attractions!