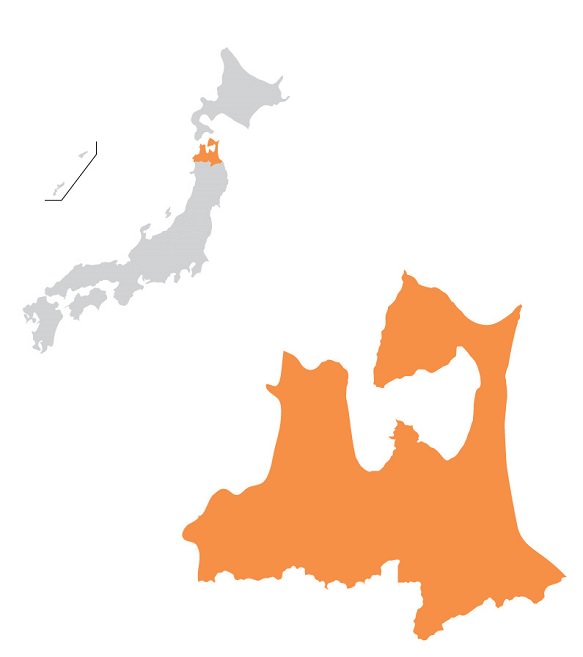 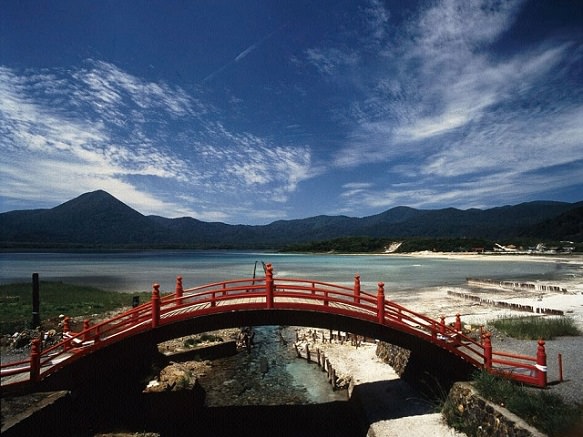 Aomori is Japan’s northernmost prefecture on Honshu, Japan’s main island. It faces Hokkaido with the Tsugaru Strait in between. Aomori is divided into an eastern and western sub region by Ou Mountains which greatly affect the two sub regions’ climates. The western region experiences strong monsoons and heavy snow during the winter from the little sunshine it receives. The eastern region does not receive much sunlight during the summer months. The Ou Mountains and its northernmost location gives Aomori a fairly cool climate year round. Osorezan (Mt. Osore) in Aomori's Shimokita Peninsula is considered one of Japan's three most sacred places alongside Koyasan and Hieizan. Mount Osore literally translates to "Fear Mountain" and is known as the entrance to hell. The mountain's landscape and geographical elements, especially Lake Usori, contributes to fearful image of the mountain. Connected to Mount Osore by a small stream, Lake Usori is compared to the Sanzu River, a river that all dead souls must cross to reach afterlife. It is believed that the deceased attempt to cross this river and in doing so many souls of dead young children build piles of pebbles to create a path to make their way across. Aomori also features the Aomori Showa Daibutsu, the tallest seated Buddha statue in Japan. The statue is located at Seiryuji, where visitors can also experience Zen meditation and enjoy Shojin-ryori, vegetarian meals Buddhists eat. 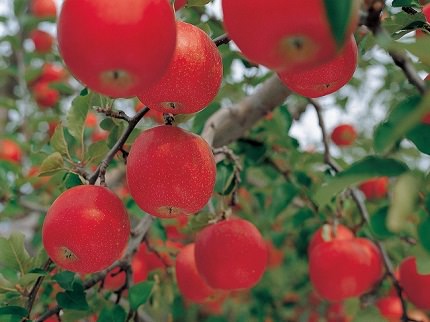 Aomori is best known for their production of apples, accounting for half Japan's apple production. Aomori's ideal climate and rich soil allow for great productions of apples. The Fuji apple, known for its sweet, crisp flavor, is also produced in Aomori and has gained popularity worldwide. The Fuji apple accounts for 80% of China's apples and is one of the top five kinds of apples in the U.S.

A local favorite of Aomori is the "ichigo-ni" (literally "stewed strawberries"). The dish uses no strawberries but is instead said to be named for the very slight pink-ish color of the dish that resembles a strawberry stew. Ichigo-ni is a soup made from simmering uni (sea urchin) and awabi (abalone) and considered a true delicacy. Today ichigo-ni is sold in cans for wide disbursement due to its popularity. 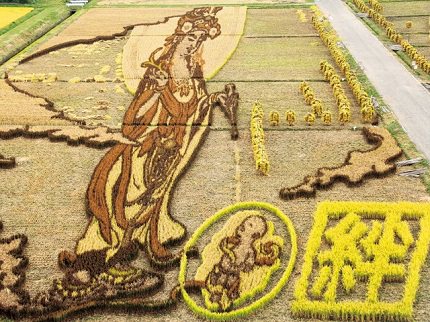 Rice Paddy Art is a form of rice field artwork that originated in Inakadate, Aomori. Various kinds of rice of different colors are planted to create a piece of art on the paddy field as a canvas. It started in 1993 when the townspeople wanted to revitalize their town and has continued since. The townspeople gather every April to decide what they would sketch and plant that year. Various designs have been created ranging from Japanese works such as sketches of Geisha and Ebisu to foreign designs such a Napoleon and Marilyn Monroe.

Tsugaru Nuri is a type of lacquer ware and traditional craft of Aomori Prefecture. Layers and layers of lacquer are applied in creating Tsugaru Nuri. The finished products have a rich color and glossy finish. Jubako (tiered lunch boxes), trays, bowls, and chopsticks are popular products of Tsugaru Nuri. 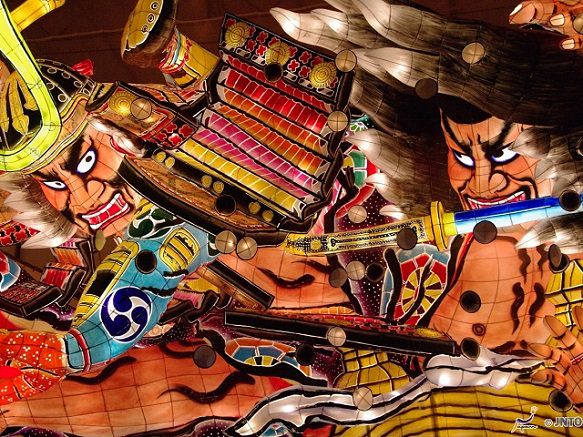 Today Aomori is best known for its spectacular Nebuta Matsuri summer festival held in August. The festival features colorful samurai shaped lanterns which are placed on floats and carried through town. The lanterns are made from washi paper and brilliantly decorated with light bulbs that add beautiful color bringing the lanterns to life.

Children and adults of all ages participate in the event, carrying about 20 floats, each by over a hundred people. Tourists can join in on the fun as long as they have the proper costumes. Extravagant floats and fireworks light up the city of Aomori as the float is carried into sea on the final day. The breathtaking Nebuta Matsuri is one of the most impressive festivals in Japan.