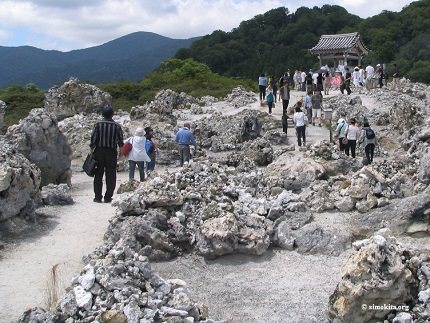 Mount Osore in Aoyama of the Shimokita Peninsula is considered one of Japan's three most sacred places alongside Koyasan and Hieizan. The sacred mountain stands 2,884 ft high and is said to have been discovered in 862 when a Buddhist priest was in search of of a sacred mountain that resembled the world of Buddha. Mount Osore literally translates to "Fear Mountain" and is known as the entrance to hell. The mountain's landscape and geographical elements, especially Lake Usori, contributes to fearful image of the mountain. Connected to Mount Osoro by a small stream, Lake Usori is compared to the Sanzu River, a river that all dead souls must cross to reach afterlife. It is believed that the deceased attempt to cross this river and in doing so many souls of dead young children build piles of pebbles to create a path to make their way across. These souls of the children are said to be protected by statues of Jizo, bodhisattva of Japanese Buddhism, found by the river. Many people place offerings such as stones, clothes, and toys to these Jizo for their protection of those souls. The story of Mount Osore, of Fear Mountain and its entrance to hell still lives on today.