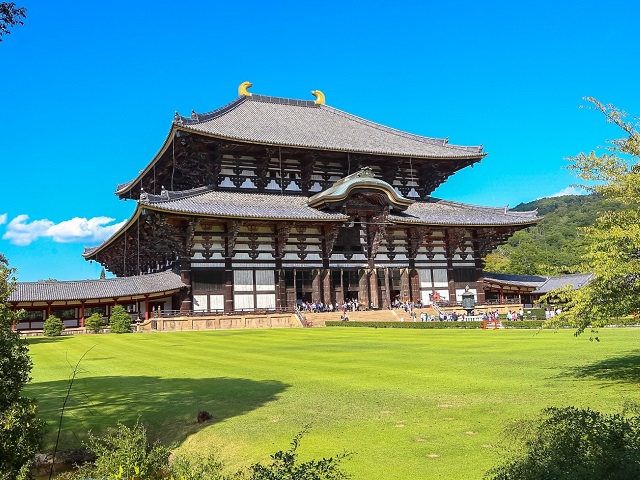 Todaiji Temple (lit: Eastern Great Temple), is Nara's most popular tourist attraction and listed as a UNESCO World Heritage Site. Despite it being constructed in 752 AD, Todaiji’s main hall, the Daibutsuden (Big Buddha Hall), is one of the world's largest wooden buildings and houses one of the largest bronze statues in the world, standing at an impressive 15 meters tall.

As you make your way to the Great Buddha and through the gates of Todaiji, you'll likely be welcomed by friendly deer from Nara Deer Park. The massive gates leading to the Great Buddha are the Nandaimon Gate (Great South Gate) and known for its two wooden statutes, standing 8.5 meters tall, representing the Nio Guardian Kings which protect the temple from evil. These Nio Guardian statutes were built during the Heian period, after a typhoon destroyed the Nandaimon Gate and required reconstruction. Renowned Japanese sculptor Unkei took on the lead for the construction of the Nio Guardian statutes and were a breath of fresh air for Japan, as it was unlike any art or sculptor the Japanese people had seen before. 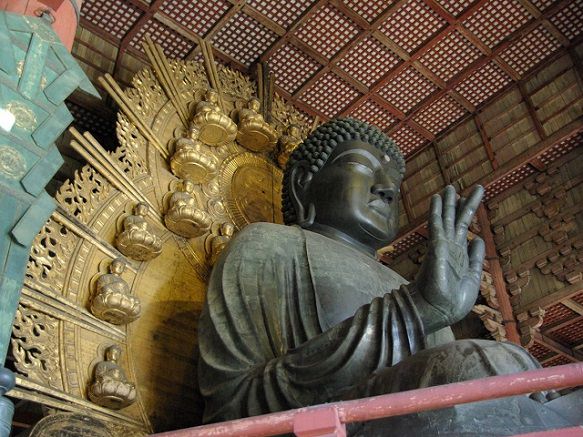 As mentioned, Big Buddha is one of the largest bronze statues in the world. The statue measures 16.2 meters in height and has a face 4.8 meters long and 3 meters wide; eyes 1.2 meters wide; and a nose 48 cms high. The materials used to construct Great Buddha are estimated to be 437 tons of bronze, 75kg of mercury, and 130kg of pure gold and other materials. View Todaiji Temple Official Site - English

Be sure to make a stop at this historic Buddhist temple and one of the world’s largest bronze statues on your next trip to Japan. Many of our tours, including the Cherry Blossom Tours and Anime Tours take you to many of these Japanese landmarks.