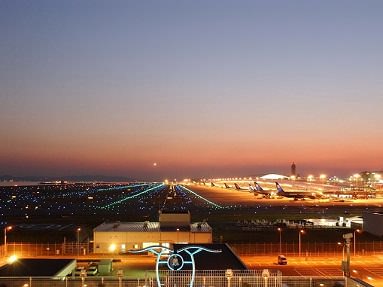 Kansai International Airport (KIX) is Japan's third busiest international airport serving as many as 25.2 million passengers in 2016. Located on a man-made island about 50 km south of Osaka, Kansai Airport was opened in 1994 as a means to alleviate the overcrowded Osaka Itami Airport. Kansai Airport handles the city's international flights and some domestic air traffic routes that were formerly from Itami.

This popular airport is one of the top two choices travelers choose when flying into or out of Osaka/Kyoto during our fully-guided Japan tours. Japan Deluxe Tours highly recommends tour participants starting their tours in Osaka to fly into Kansai International Airport or Osaka Itami Airport to get their Japan tours off to a smooth start. For anime fans, Kansai Airport is home to a Pokemon Store with exclusive KIX-themed goods. Thanks to the convenient location and boasting great souvenir stores and shopping options, KIX is one of Japan's top airports and comes highly recommended from Japan Deluxe Tours!