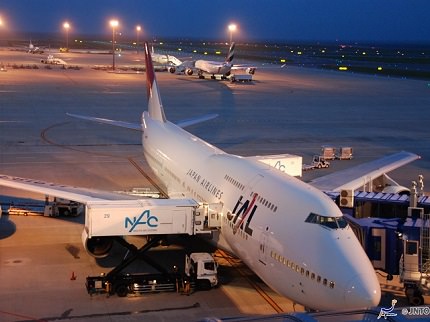 Central Japan International Airport Centrair (airport code: NGO), also known as Chubu Airport, is just outside Nagoya and is Japan's third most important international airport after Tokyo's Narita Airport and Osaka's Kansai Airport. Constructed on a man made island in the Bay of Ise, Central Japan Airport was opened in February 2005 in time for the Expo 2005 Aichi. The airport took over all the international flights and some domestic air traffic formerly handled by Nagoya's Komaki Airport. Interestingly, Chubu airport is one out of the five off-shore airports in Japan. The airport also took over cargo flights from Osaka and Tokyo.

The airport has over 60 shops for travelers and the general public. The shops are arranged into two streets: "Renga-Dori" & "Chochin-Yokocho" shopping streets. The shops along "Chochin-Yokocho" are based on a traditional Japanese design, intended for an authentic Japanese look. While Chubu Airport may not be as popular as the other airports in Tokyo and Osaka, travelers can find great flight deals and affordable discounts when flying into Nagoya Airport. If you do plan to fly into Nagoya before your vacation with Japan Deluxe Tours, we can help you find the perfect domestic flight into Tokyo or Osaka before your Japan tour begins!