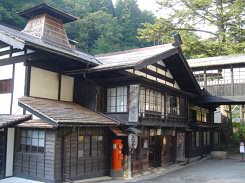 Ryokan is Japanese style hotel which has natural onsen (spa) water that have rejuvenated people for hundreds of years. Moreover, it has tatami floors, futon beds and traditional Japanese cuisine. There is an opportunity to experience the traditional Japanese lifestyle and hospitality.

Guests sleep on top of futons on tatami flooring, made of woven straw packed with rice straw and bordered by plain green cloth. Tatami are soft underfoot and provide an ideal surface for Japanese futons. The flat, heavy bedding is laid directly on the floor. Guests sleep on top of the futon with a blanket providing a snug fit. 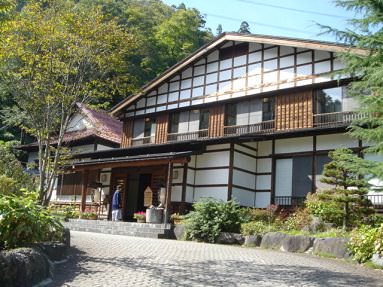 Ryokans are Japanese-style hotels. Rooms are decorated in a traditional manner - simple furnishings, wall hangings and a large table with green tea ready to serve. Each room has an attached bathroom although there is always a larger Japanese-style shared bath to use as well. Meals are a real treat using the best local and seasonal produce for their Kaiseki Ryori. At Japan Deluxe Tours, we make sure to include a one-night stay in a Japanese style Ryokan hotel to provide you with an authentic, comfortable Japanese experience for your vacation. 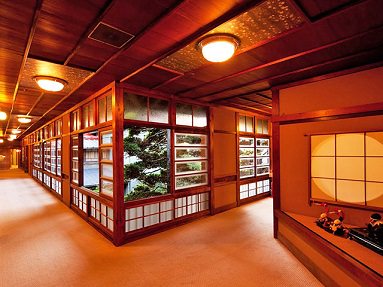 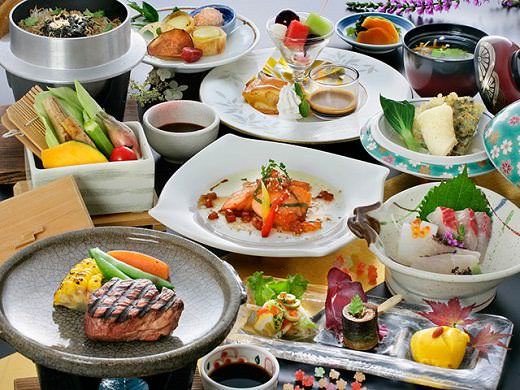 Kaiseki ryori is regarded as Japan's most exquisite culinary refinement. Its origins are found many centuries ago in the simple meals served at the tea ceremony, but later it evolved into an elaborate dining style popular among aristocratic circles. Today, kaiseki is served in specialized restaurants or can be enjoyed by staying at a ryokan (Japanese style inn). Kaiseki meals have a prescribed order to their dishes, most of which are prepared by using one of the common techniques of Japanese cooking. However, kaiseki chefs have considerable freedom to add, omit or substitute courses in order to highlight regional and seasonal delicacies and personal style. 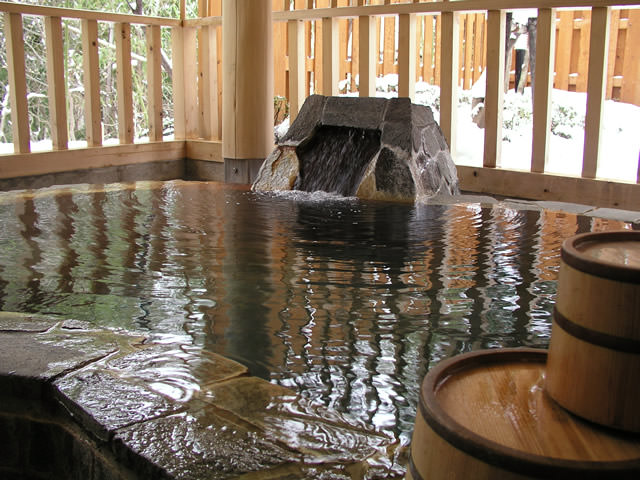 As a volcanically active country, Japan boasts some of the best natural hot springs in the world. Referred to as "onsen", these geothermal heated springs are scattered all across the country in both indoor and outdoor facilities. These waters are considered to have restorative properties with natural minerals that are thought to heal aches and pains, ease and prevent illnesses, and generally maintain a healthy body. To contribute to the Japanese appreciation for nature, hot springs are an integral part of maintaining a tranquil, Zen-like equilibrium. Many flock to one of hundreds of hot spring destinations as a peaceful getaway, to cleanse the body and soul, and to simply relax. 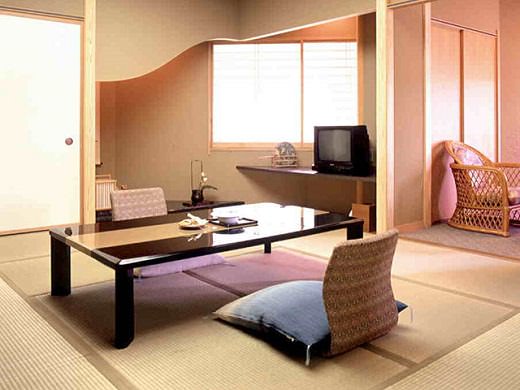 Tatami is a thick straw mat with rush grass woven over the surface. The mat is reversible. Shoes are taken off at the entrance hall, and tatami mats are stepped on with bare feet. The appeal of a Japanese-style room is not only its coziness, but also being able to sense outdoor nature while inside. Because traditional Japanese-style rooms are built with natural materials only, such as wood, paper, stones, soil, straw, and fabric, they provide not only comfort, but also function to clean the air because the materials breathe. 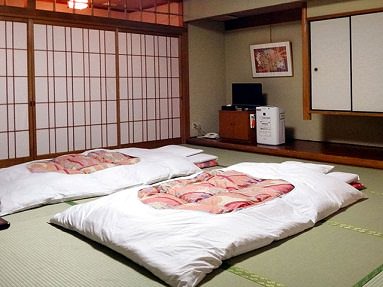 Guests sleep on futon (Japanese style bedding) laid out in the evening by maids after the evening meal. It ordinarily consists of a mattress, sheets, thick coverlet, and extra blankets if needed. The fusion of Japanese and Western styles can even be found in the bedroom. In the case of washitsu, bedding (futon) is usually directly placed on the tatami, but low beds are used in the place of futon at some ryokans. In some cases, the bedroom is designed in Western style. Even in Western-style bedrooms, you will frequently find elements of Japanese-style interior design incorporated. 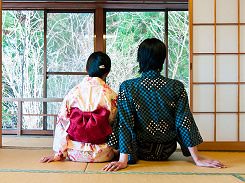 Yukata is the typical lounging wear of a ryokan, typically blue and white-patterned. After taking a bath, you change into the yukata placed in your guestroom. The room maid will make sure that the yukata is the right size for you. There are men's kimono and women's kimono, and at some ryokans, you will be able to choose from a number of designs and obi sashes. Sets of yukata, haori and obi are placed in accordance with the number of persons staying in each guestroom. The tanzen and tabi will also be provided depending on the season. 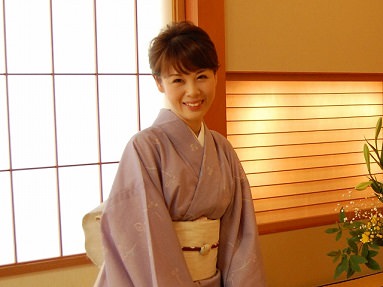 The okami not only bears the greatest responsibility for waiting on and taking care of guests but also acts as the chief service manager on behalf of the ryokan.The okami's role corresponds to that of a general manager in a Western hotel. In many cases, the okami is the owner of the ryokan or the wife of the owner, which means that the okami, as the representative of the ryokan, attends to all external affairs such as business matters and cooperation with the local community.
Among the numerous ryokans which have developed as family businesses, the okami has constantly supervised guest service in general and continues to play the central role. For this reason, many of the ryokans have been handed down through successive generations within the same family.