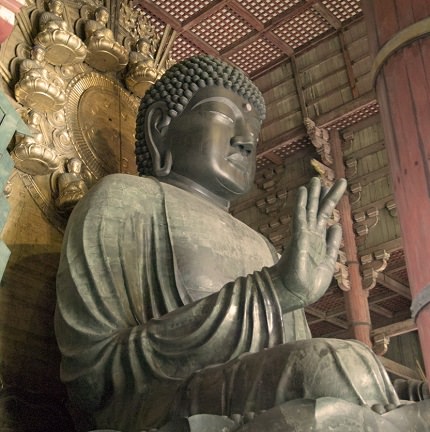 Nara with its small town feel, its parks, temples, and 1200 sacred, well fed deer is perhaps one of the friendliest and most relaxed city in Japan. It hasn't always been this way of course. Nara has enjoyed a turbulent history. Horyu-ji Temple is known as the oldest existing Buddhist temple in Japan. Nara's centerpiece the magnificent Great Buddha, housed in the largest wooden structure in the world, has seen its fare share of troubled times. Although founded in 743, the present structure dates from 1706, rebuilt after the last of numerous great fires. Nara is the home of Buddhism in Japan and the Nara National Museum, devoted to Buddhist art has exhibits of archaeological finds as well as displays of sculptures, paintings and calligraphy and is a must see for those with an interest in Buddhist history. The main attraction of the Horyuji'sToinGaran (Eastern Precinct) is the Yumedono, the Hall of Visions. The temple is also inscribed as a World Cultural Heritage Site. Tourists can visit Nara throughout the year to see scenic spots such as Mt. Yoshino, known as one of the best cherry blossom viewing point in Japan. In 2004, Yoshino was designated a cultural UNESCO World Heritage Site named the "Sacred Sites and Pilgrimage Routes in the Kii Mountain Range". Another popular tourist spot is Nara Park with its friendly deer which have been treasured as messengers from the gods. Not only are these deer friendly but also polite: deer crackers are for sale around the park, and some deer have learned to bow to visitors asking to be fed.