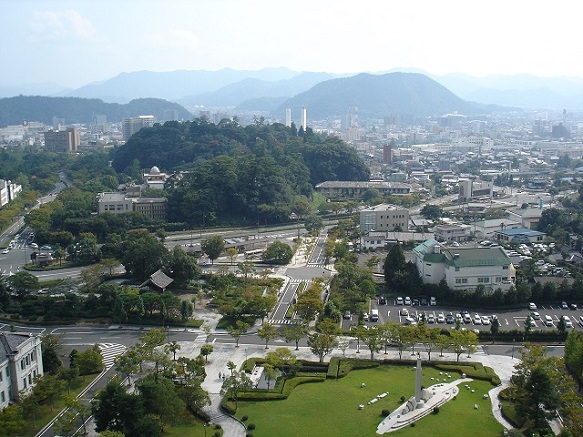 Yamaguchi City is located nearly in the center of Yamaguchi Prefecture, and is the center of the local administration and economy. Built in the middle of the 14th century by a warlord in the Ouchi family in imitation of Kyoto, Yamaguchi City is often referred to as the Western Kyoto. There are many popular sites in the city such as longstanding temples including Rurikoji Temple, Ryufukuji Temple, Toshunji Temple, and the Sesshu Garden designed by Sesshu, the most outstanding ink painting artist of Japan. Rurikoji is a Buddhist temple best known for its five-storied pagonda that is a national treasure. Built in 1442, the pagoda is justifiably ranked among Japan's three greatest, alongside those of Horyuji Temple near Nara and Daigoji Temple in Kyoto. The temple grounds of Rurikoji are also known as Kōzan Park. Kozan Park also features the burial site of members of the Mori family, who ruled the region during the Edo Period. Also in the park stands Chinryutei, a tea house where Saigo Takamori (a key historical figure who contributed to ushering in the Meiji Period) and others pretended to practice the tea ceremony, but in reality planned the ultimately successful overthrow of the Edo Shogunate. The move led to the Meiji Restoration and the end of Japan's feudal age in 1868. Visitors can enter Chinryutei for free and view its simple tatami mat rooms on the second floor. On the first floor are some exhibits in Japanese about the characters who led the Meiji Revolution. While you are in Yamaguchi, it is recommended to experience the steam locomotive SL Yamaguchi, running between Shin-Yamaguchi Station and Tsuwano Station on JR Yamaguchi line.