tunnel of red leading to the crest of Mount Inari 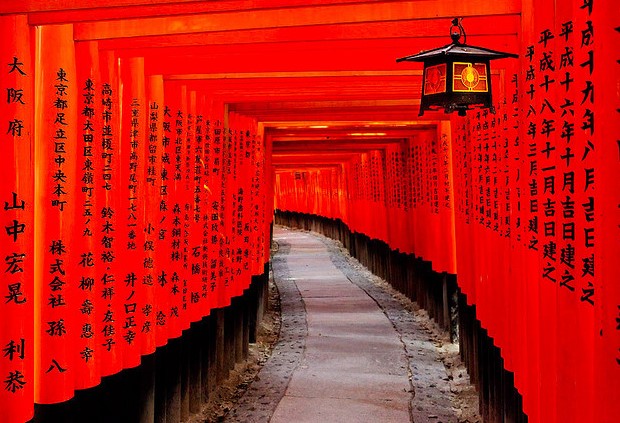 Best known of the Kyoto shrines, Fushimi Inari Shrine is visually stunning: thousands of torii gates form an unbroken tunnel of red leading to the crest of Mount Inari. Oldest and most famous of all the Inari shrines in Japan, Fushimi Inari Taisha is, like the others, dedicated to the Shinto deity thought to protect the harvest and bring prosperity in business. In addition to the red torii gates, the shrine boasts thousands of fox statues - Inari's messengers - and the tea houses and shops around the shrine sell delicacies associated with foxes:inari-zushi and kitsune-udon. Though popular with tourists and locals alike, Fushimi Inari Shrine maintains a sense of tranquillity, and the torii-lined paths leading up the mountain provide a wonderful way to escape the hustle and bustle of the city.