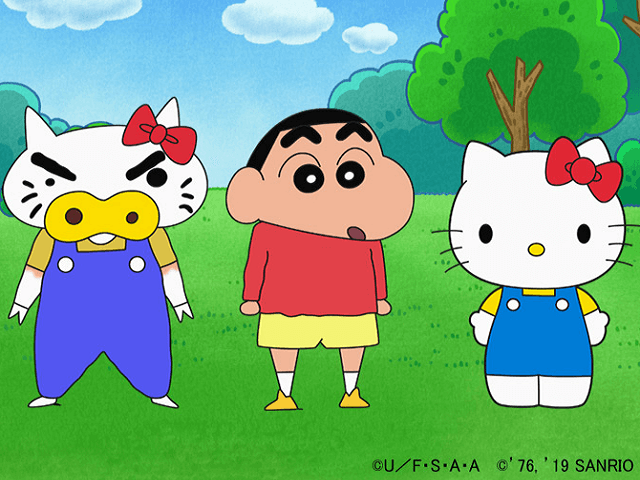 Here to kick off the new Reiwa era starting from May 2019, everyone's favorite Sanrio character Hello Kitty will be making an appearance on the long-running hit anime Crayon Shin-Chan. Set to premier on May 10th, the episode is titled Kitty-chan vs Burii-chan da zo! and takes place in the real-world Sanrio Puroland.

According to Sanrio's press release, the episode will bring Crayon Shin-chan's Nohara family to the famous Sanrio theme-park to meet Hello Kitty. While there, Shin-chan and his family encounter a Hello Kitty impostor Burii-chan and will team up with Hello Kitty to catch the foul impostor.

Crayon Shin-chan's manga spans 50 collected volumes from 1990 to 2010. The anime adaption which began in 1992 is still running and has been dubbed in 30 languages which aired in 45 countries. The show also inspired multiple spin-offs, video games, and movies. Shin-chan is described as a mischievous boy who constantly gets into trouble due to his own misunderstandings. The anime even lead to real-world collaborations, such as the Crayon Shin-chan train in Kurihashi Station, Japan.

Coinciding with Hello Kitty's 40th anniversary, the Crayon Shin-chan X Hello Kitty episode is sure to turn heads as the world's most famous Kitty teams up with Japan's most endearing trouble-maker.