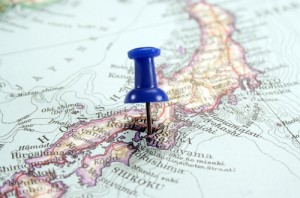 In the last few weeks of December, Japan officially reached its goal of bringing in 10 million international visitors over the course of one year, reports The Japan Times. According to the source, a ceremony was held at Narita International Airport, where transport administer Akihiro Ota announced the milestone and honored Praphan Pha Tra Prasit and Yu Pha Da Pha Tra Prasit, the couple from Thailand who were deemed the collective 10 millionth visitors.

"The goal of 10 million visitors in one year was first set in 2010, but only 8.61 million tourists showed up," explains the news outlet. "While the figure may have fallen short of the goal, it was still a record that stood until this year. There was a serious decline in 2011 due to the Tohoku natural disasters and Fukushima nuclear crisis. The figure recovered last year before finally reaching the 10 million goal in 2013."

The source reports that Japan is hoping to double and even triple this annual goal in the coming years, noting that it aims to bring in 30 million tourists per year by 2030.

If you're planning a big trip for 2014 and are trying to decide where to go, consider taking a Japan vacation. There's a lot to love about this gorgeous Eastern country — from its brilliant cities to its tranquil countryside and everything in between.

At Japan Deluxe Tours, we offer a number of comprehensive Japanese vacation tours that include hotel accommodations, meals, ground transportation, access to an English-speaking tour guide and more. Check out our website to see what's available.