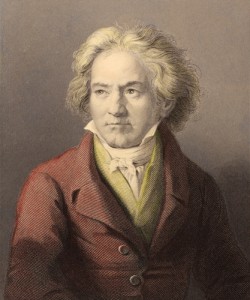 When you think about popular songs associated with New Year's Eve, "Auld Lang Syne" is probably the first one that comes to mind. In Japan, however, Beethoven's Ninth Symphony has become the go-to tune for ringing in the New Year, and according to the San Jose Mercury News, it's beginning to catch on in the United States, too.

The source reports that the final movement of the symphony, commonly known as "Ode to Joy," was introduced to Japanese soldiers during World War I. It quickly became a symbol of Japanese nationalism that would be particularly prominent throughout World War II.

"Sometime after World War II, the 'Ode to Joy' became associated with New Year's and Japanese orchestras now regularly cash in with multiple year-end performances, in much the same way that American ballet companies are sustained by endless repeats of 'The Nutcracker' during the holidays," explains the news outlet.

Over the years, Americans began adopting this Eastern tradition as they came to realize that the theme of "Ode to Joy" — the unity of mankind — was perfect for a secular holiday like New Year's. These days, many orchestras in the United States perform Beethoven's Ninth Symphony in December as the New Year approaches.

Are you interested in learning more about Japanese customs? If so, consider visiting this gorgeous country so you can experience all that it has to offer. At Japan Deluxe Tour, we have a number of comprehensive Japanese vacation tours that may pique your interest. Check out our website today to learn more!