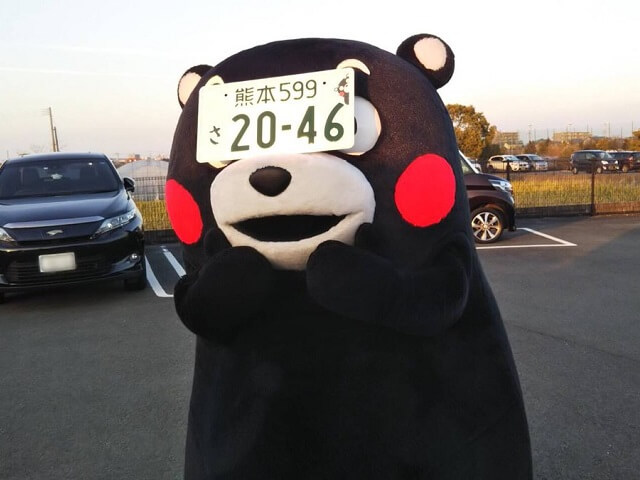 While Japan is well-known for delicious foods, colorful night-life, and an intricate balance between old and new, Japan has been a bit behind when it comes to vanity license plates. Up until 2018, most license plates in Japan followed a standard format with the Prefecture name at the top of the plate, a Japanese hiragana letter to the left, and four numbers in the center. However, the Ministry of Land, Infrastructure, Transport and Tourism are letting prefecture's add their own flair with unique regional-specific license plates.

Finally making his appearance on a license plate, Kumamon's Kumamoto License plate continues to be the most popular vanity plate design according to the Ministry of Land, Infrastructure, Transport and Tourism. Unlike other mascot-inspired plates, Kumamon appears twice on the Kumamoto-exclusive vanity plate. First, Kumamon can be seen peaking from the top right corner. However, a closer inspection would show his silhoutte in the center of the plate as well.

After the tragic effects of Japan's Kumamoto Earthquake, Kumamon played a major roll collaborating with other companies and goods to help boost tourism to the affected areas. Kumamon's popularity has grown into one of Japan's most loved mascot characters, boasting over 800 thousand followers on Twitter.

You might be able to buy a souvenir vanity plate while in Kumamoto or other areas of southern Japan. Join a Southern Japan tour or Grand Tour package with Japan Deluxe Tours to spot the license plates while we navigate our way through Kumamoto and the rest of Kyushu!