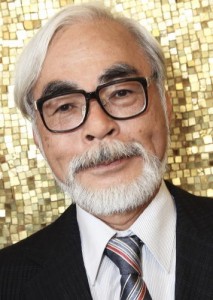 Beloved anime director Hayao Miyazaki announced his retirement from filmmaking in September. However, it appears that the 72-year-old, who is best known for anime classics like "Spirited Away" and "Howl's Moving Castle," is keeping busy by working on an exciting new manga, according to a recent report from The Escapist, a digital entertainment resource.

Miyazaki appeared on the Japanese television show "Professional" last week to talk about his current projects.

"The show discussed Miyazaki's work on his last movie before retirement, 'The Wind Rises,' and then gave a first look at his new 'Warring States' samurai manga," states the source. "Miyazaki is writing and illustrating the yet-unnamed series set in Japan [...] Producer and colleague Toshio Suzuki believes that the legendary director is working on the manga without having received a manuscript payment. There's no word yet when Miyazaki's samurai manga will be published."

Interested in seeing some of the artwork from the manga? You can take a look at it here.

If you're a fan of Miyazaki's films — and anime in general — you should consider signing up for Japan Deluxe Tour's Tokyo Anime Fair and Tokyo Tour, which takes place in March 2014. For an affordable price, you'll have the opportunity to participate in the anime fair itself and enjoy all the other sites and scenery that Tokyo has to offer. The tour package includes four nights of hotel accommodations, eight meals, ground transportation, access to an English-speaking guide and more.

Check out our website today to find out more about this and other incredible Japanese vacation tours.