3 of Tokyo's most unique karaoke bars

3 of Tokyo’s most unique karaoke bars 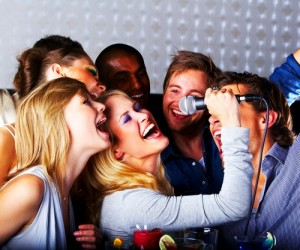 If you're planning a trip to Japan, you can't miss out on the opportunity to visit a bar or club that features karaoke - a singing phenomenon that became popular in the 1980s and has spread across the world. Whether you have the voice of an angel or can't carry a tune, you're sure to have a one-of-a-kind experience singing to your choice of thousands of different songs.

In this post, we'll highlight some of the most unique karaoke bars in Tokyo:

Karaoke Kan - Fans of the 2003 Bill Murray and Scarlet Johansson film Lost in Translation will recognize this establishment as the place where Murray's character performed karaoke to tunes by Roxy Music and Elvis Costello. It tends to attract younger crowds in its rooms adorned with bold paint and disco lights.

Karaoke No Tetsujin – At this karaoke chain, visitors are given the chance to dress up, choosing from a number of silly costumes. It's amazing how [dressing up] changes the experience — and the song choices, too, notes CNN Travel.

Lovenet - Known for its themed rooms — some of which include hot tubs — this eclectic spot is the ideal destination for large or small groups of people hoping to enjoy a fun night out. Lovenet also features a full menu of food, so guests are encouraged to show up hungry.

Are you hoping to tour Tokyo in the near future? If so, you may want to look into Japan Deluxe Tour's variety of cost-effective tour packages, which include fully escorted tours, airfare, hotels, meals and more.