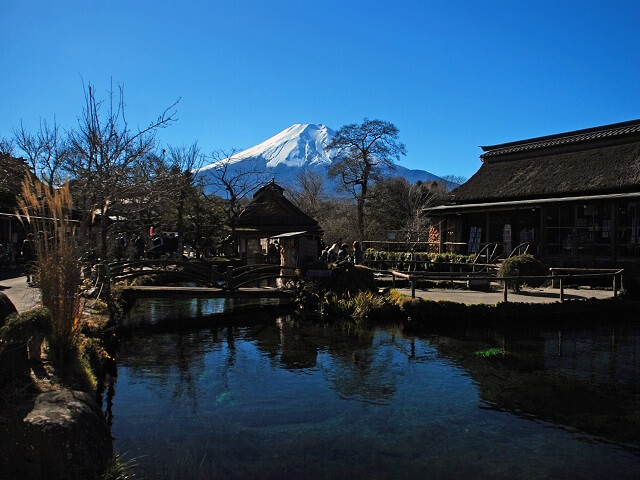 Oshino Hakkai is a set of 8 clear water ponds in Oshino, a small village in the Fuji Five Lake region. Located on the former 6th lake between Lake Kawaguchiko and Lake Yamanakako, these 8 ponds were formed by Mt. Fuji's subsoil water. The clear water is home to many fish and there are usually merchants and stands which sell delectable treats to visitors. There is also a small open air museum, 300 yen entry fee, which houses old farm tools, household items, and samurai armaments. A popular spot visited by many, the clear waters make for excellent photographs during any season.

The smallest of the 8 ponds, this spring was named after the way bubbles would rise to the surface similar to the way water boils in an iron pot or okama

An oval shaped pond, legend states that there is a whirlpool that will drag you to the bottom. Because of this legend, it has been long forbidden to wash anything in this pond.

Named after the resemblance to a long-handled sake server, this pond is believed to be where romantic connections are formed.

If the water is still enough, you can see a perfect inverted cone of Mt. Fuji in the reflection.

Named because of the areas of cloudiness or nigori, this pond was originally known for its clear drinking water

Named because of how well it reflects Mt. Fuji like a kagami, or mirror, legend states that the surface of this pond can tell the difference between good and evil.

Said to be surrounded by shobu, or iris, beds, the area is quite fragrant when in bloom. Next to this pond is the Oshino-Hakkai Shobuike Park, where you can see irises during the proper season.

The largest of the 8 ponds, this is pond marks the exit or deguchi of the Shibokusa Region, which is how it earned its name. It is also the only pond to be isolated from the other 7.