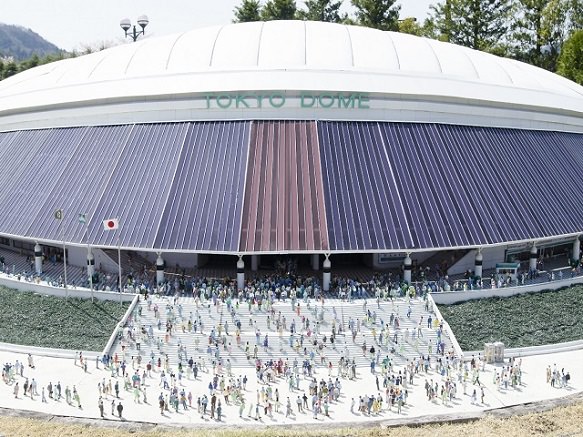 Tokyo Dome, Japan's largest baseball stadium, seats 55,000 and is home to the Yomiuri Giants. More than 60 national baseball games are held annually as well as several international games. Tokyo Dome not only hosts baseball games but also other sporting events such as football, basketball, and kickboxing.

Tokyo Dome not only holds sporting games but also concerts, conventions, exhibitions, and other events. Many Japanese artists' dream is to perform in this venue and to fill the space with excited fans. Several renown international artists have performed at Tokyo Dome including Michael Jackson, Madonna, Bon Jovi, The Rolling Stones and others.

The Tokyo International Great Quilt Festival 2015 will also be held at Tokyo Dome. The festival will display numerous beautiful quilt work and techniques. Different types of quilt including traditional Japanese quilt and Hawaiian quilts as well as a special exhibition of the Little House on the Prairies told with quilts will be held.

At Japan Deluxe Tours we have planned our Tokyo Quilt Festival Tour which will take you to two days of the Tokyo International Great Quilt Festival 2015 as well as to a quilt retail shop, Nippori Textile Town, and around the highlights of Tokyo and Kyoto for you to gain a chance to explore Japan while appreciating the beautiful art of quilt.