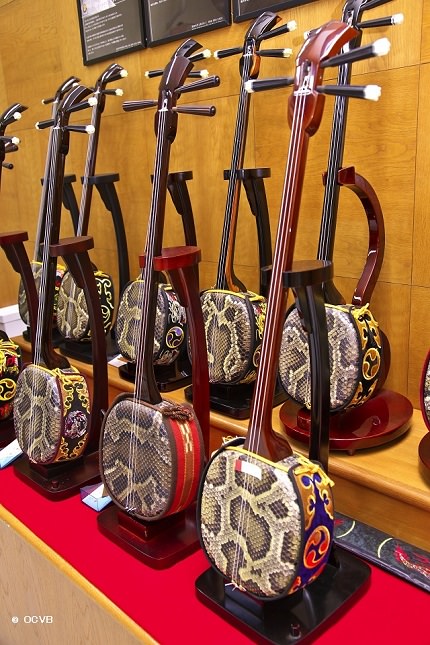 Sanshin is a three stringed musical instrument of Okinawa that developed into the more commonly known shamisen in mainland Japan. A sanshin has three parts: the neck (sou), the body (dou), and its strings (uujiru, nakajiru, and miijiru). The sou is usually made from a single piece of wood, commonly ebony, oak, rosewood, or ironwood. The dou is made from wood and was traditionally covered with snakeskin. The sanshin, which literally means "three strings", has three strings uujiru, nakajiru, and miijiru. The strings mean male string, middle string, and female string and vary from thickest to thinnest respectively. The strings of the sanshin are white except those of Amami which are yellow. Strings of the sanshin were tradtionally made from silk although those made from tetron are more commonly available nowadays. When playing the sanshin, a small piece of plectrum is worn on the index finger. Shamisen plectrums are called bachi and were usually made from water buffalo horns to strike the strings.

Now what is the difference between the sanshin and shamisen? Sanshin is believed to have originated from the Chinese string instrument sanxian 600 years ago. A century later, the sanshin developed into the shamisen when it made its way to mainland Japan. The size of the instruments are also different. The sanshin has a smaller dou than that of the shamisen and is covered with snakeskin, rather than cat skin which covers the dou of the shamisen.

Enjoy the traditional sounds of Japan while touring through the country with Japan Deluxe Tours. If you'd like to see an authentic Shanshin performance during your vacation, let us know while booking to make the necessary arrangements. You can also opt for an affordable custom Japan tour through Okinawa to enjoy the Sanshin and the rest of Okinawa! 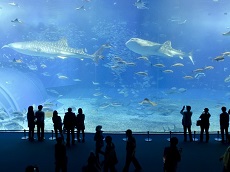