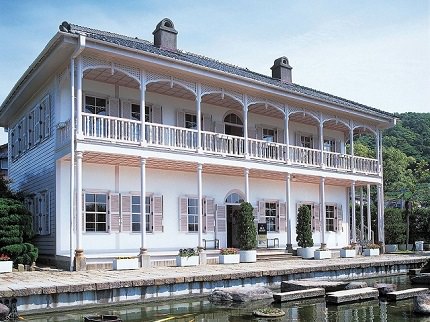 Glover Garden is an open-air park and museum in Nagasaki that exhibits the living the homes and life of the city's former foreign residents. Located on the hill where western merchants settled down after the end of Japan's era of seclusion, Glover Garden was originally built for the Scottish merchant Thomas Blake Glover. Glover is credited with Japan's modernization in ship building, coal mining, and other fields. While the main attraction of the garden is the Former Glover House, there are also several Western-style buildings that were relocated to the garden from other parts of Nagasaki. Visitors can enjoy exploring the preserved rooms to see the lifestyle of the wealthy foreigners in Japan. The homes include decorations, furniture, and appliances used by the inhabitants, with information on the people who lived in the houses. From the top of the garden, guests can enjoy spectacular views of Nagasaki and it's harbor. The garden also features the stone gate of the Nagasaki Masonic Lodge with the names of the original members. In addition to Western elements, the garden also has Japan's largest sago tree, said to be 300 years old and was a gift to Glover from the Satuma feudal lord during the Satuei War. With the unique blend of Japanese and Western elements, the garden is one of Nagasaki's best spots to visit and attracts around 2 million visitors a year. 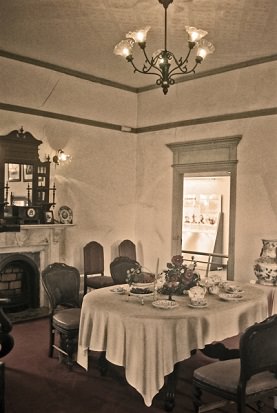 The true charm of Glover Garden is the Former Glover Residence, the oldest Western-style house in Japan on the Minamiyamate hillside overlooking Nagasaki harbor. Completed in 1863 and built by the same architect who built Oura Church, the house has been designated as an "Important Cultural Asset" and is noted for it's unique blend of Western and Japanese elements, such as the stone-floor verandas, latticed arches, French windows, Japanese tile roof, and British chimneys. The beauty of the house and surroundings are said to be reminiscent of Puccini's opera, earning the nickname "the Madame Butterfly House." To honor the nickname, there are statutes of Puccini and Miura Tamaki (the actress who portrayed Cio-Cio-san) standing near the house in the park. Glover is also believed to play an active roll in changing Japan. One of the houses in the garden had no windows at the roof and was used by Ryoma Sakamoto when plotting to overthrow the shogun. Fun fact about Glover, he's credited with fostering the growth of Japanese beer. He started the Japan Buruwari Company, which later became known as Kirin.

See another side of Japan's history while we explore the Glover Garden and the rest of Nagasaki during our exciting line of Southern Japan Tours or Cherry Blossom Grand Tour Packages available year-round. You can also customize a private Japan tour to include Glover Garden, Oura Church, and a delicious slice of Castella cake while enjoying the highlights of Nagasaki!