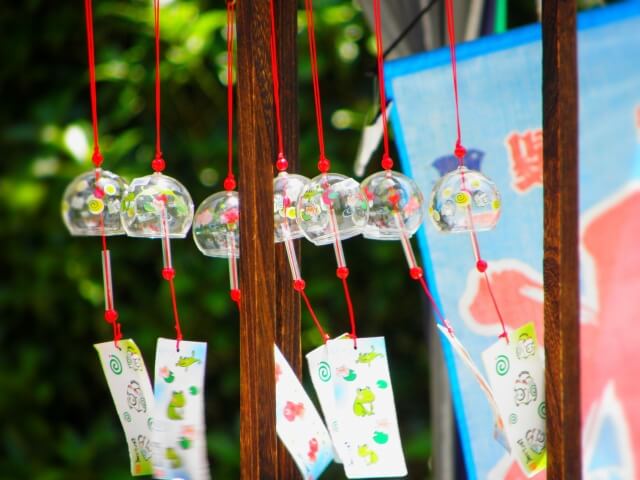 A furin is a Japanese traditional wind-chime, made of glass, bamboo, or metal, that is often seen hanging in public spaces during Japan's summer season. They have been produced since the Edo period, and are believed to come from Buddhist Futaku bells. Due to the roots in Buddhism, it is traditionally believed that furin can also ward off evil spirits. While the furin doesn't directly affect the weather, the sound of the chime from the furin is described as cooling and relaxing, and invokes a feeling of calmness. The wind chime has a simple design, often a sphere with two gaps at the top and bottom of the piece. A thread runs through the gaps with metal or glass to hit against the sphere to produce the chime's sound, and there is usually a piece of paper attached to the bottom part of the thread. Sometimes kids and adults can paint blank furins for a unique design, or can buy intricate designs at stores to hang.