Kyudo | Way of the Bow 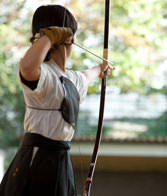 Kyudo is the modern martial art of Japanese archery and known as "Way of the Bow". The exact origins of kyudo are unknown but images featuring archery have been found from the Yayoi Period (300 BC to AD 300). Those who practice kyudo are referred to as kyūdōjin and kyudo experts are kyūdōka. Kyudo involves a yumi, or bow, which is shorter than ordinary archery bows and thus provides more power.