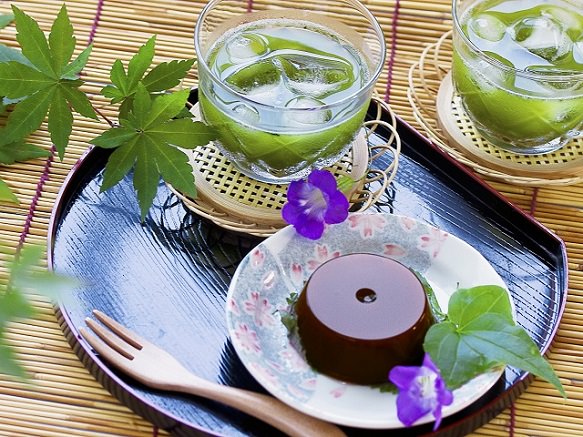 Yokan is a sweet red bean paste dessert in jelly form. Made from red beans, sugar, and kanten (agar), yokan is sold in block form and served sliced. Yokan can be as simple as just red bean flavor but can also include actual red beans, chestnuts, sweet potatoes, and more. There are two main types of yokan: neri yokan and mizu yokan. Neri yokan is the common yokan that can be eaten at room temperature. Mizu yokan contains more water than neri yokan and is eaten cold during the summertime. While yokan is typically made of red beans to give the darker color and rich flavor, yokan is also made with shiro an (white kidney bean paste), which can be seasoned and colored with green tea powder for a more mild, refined tatse. Yokan actually originated from a Chinese gelatin recepie that used sheep. However, the Buddhists during the Kamakura and Muromachi periods forbade killing animals, so the monks used wheat flour and azuki beans. It wasn't until agar was introduced in Japan that gave way for the modern yokan we enjoy today. Whether it's enjoying Neri Yokan with tea on a cool spring day or enjoying mizu yokan during the hotter summer months, try this popular dessert during Japan Deluxe Tour's fully-guided line of Cherry Blossom Japan Tours, or just pick one up before you fly home after your vacation in Japan! 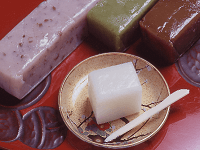