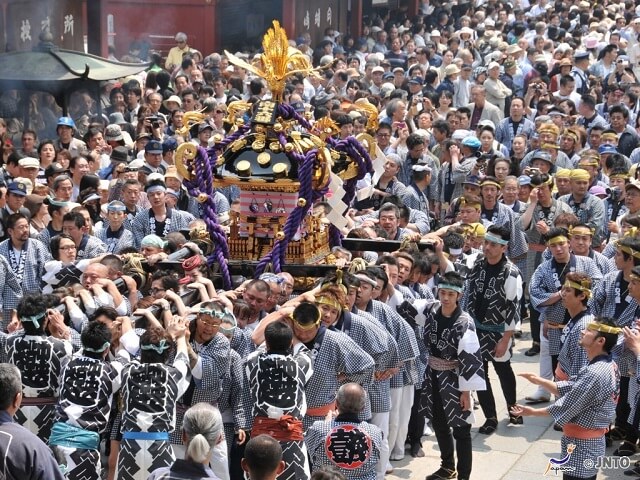 Possibly the wildest festival in Tokyo, the Sanja Matsuri is a festival celebrated in Asakusa every year. The Sanja Matsuri celebrates the spirits of the Hinokuma Brothers who discovered a statue of the Bodhisattva Kannon, the principal image of Senso-ji Temple, and Nakatomo Hajino who established the temple. Mikoshi (portable shrines) bearing the images of the spirits are carried through the Asakusa district with wild energy and vigor, drawing in crowds local and internationally to the festival. Several portable shrines are carried through the city be men, women, and children, with the belief the more intense the shaking and jolting, the more power the spirits will receive. While there is plenty of music, food vendors, and plenty to see, the highlight of this festival comes on the final day when the three mikoshi from Asakusa are paraded through the streets. After the mikoshi are returned to Asakusa, there is a ceremonial dance and drum performance to end the festival

While the festival draws in thousands for the energy and intensity, the Sanja Festival is also referred to as the Yakuza Festival by many. During the festival, many Yakuza memembers, easily identified by their tattoos, join the festivity with their mikoshi. Just like everyone else, the Yakuza raise their mikoshi with the same intensity and passion, but their tattoos make for a sight. There is also the occasional geisha who may stop by, a sight more common in Kyoto than in Tokyo. If seeing a Yakuza member decked out in authentic Japanese tattoos is something you were hoping to see, join our Sanja Festival Japan tour and experience the fun! 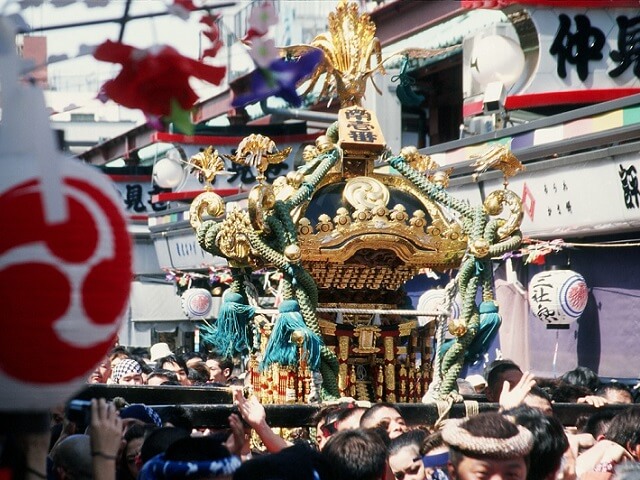 The Mikoshi (portable shrine) are an important part of the Sanja Festival. The three paraded on the final day act as a portable Asakusa Shrine, with up to 500 people carrying one through out the day. These shrines are always swarmed with people because of their importance, with many fighting for a chance to carry the shrine. These extravagant portable shrines are not only an honor to lift, but they also are carefully decorated and crafted, costing upwards of forty million yen. There are also another 100 smaller mikoshi paraded during this festival, some carried exclusively by women or children. No matter the mikoshi size, everyone participating is filled with excitement and a wild energy that's infectious. 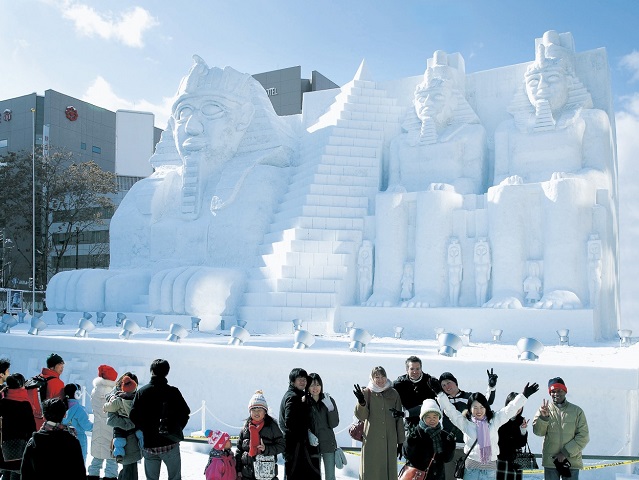 One of Japan's largest winter festivals in Hokkaido, Sapporo