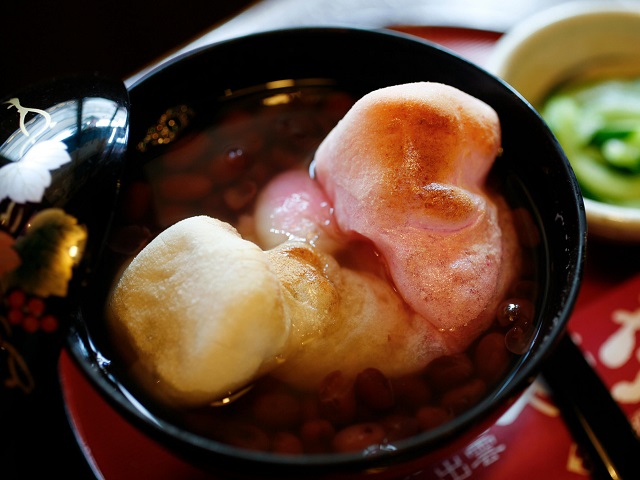 En-musubi Zenzai is a sweet, red bean dessert originating from Izumo in the Shimane Prefecture. As a variant of Shiruko or Zenzai, En-Musubi Zenzai is a soup-like mixture of bean paste and crushed bean paste with mochi inside. White and red (or pink) mochi is grilled and are typically in the center of en-musubi zenzai, meant to represent the meeting of the gods and mortals. Izumo is famous for the Izumo Taisha Shrine, where the god who created Japan is said to be enshrined. Okuninushi no Okami is also believed to be the god of marriage and relationships. The dessert is based on the coming together of Gods and mortals and is eaten in October to celebrate the shrine. En-musubi zenzai is rather sweet, so it isn't a surprise to see stores in Shimane offer pickles to balance the flavors. En-musubi can also refer to the romance or marriage between two people, which makes it a popular dessert to share among couples. If you're walking down Shimane on one of our Japan Tours, you just might see someone enjoying en-musubi zenzai hot in the winter or cold during summer. Some restaurants even offer the popular dessert with noodles for a unique way to savor the snack. Enjoyed hot or cold, why not try en-musubi zenzai while you're in Shimane with a custom Japan tour package vacation?