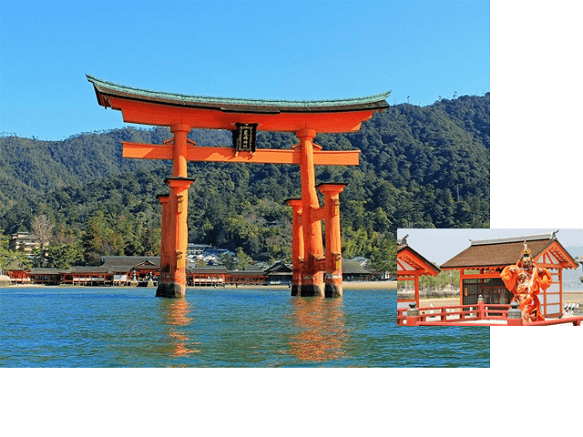 Miyajima Island is home to the famous Itsukushima Shrine on the Island Sea nearby Hiroshima. The Shrine was built in 593 and is famed for it's magical "floating torii gate." The entire shrine complex appears to float on water during the high-tide, resulting in an almost mythical like feel as if you were in a Ghibli movie or some fantasy world. The image of the floating red gates along the calm waters has grown to be one of the most recognizable images of Japan by foreign and international tourists, next to the iconic Mt. Fuji and the Great Wave of Kanagawa Hokusai Ukiyo-e. The shrine was later remodeled in the shinden-zukuri style thanks to the funding of Taira no Kiyomori, the tragic warlord of the late Heian Period (12th Century). 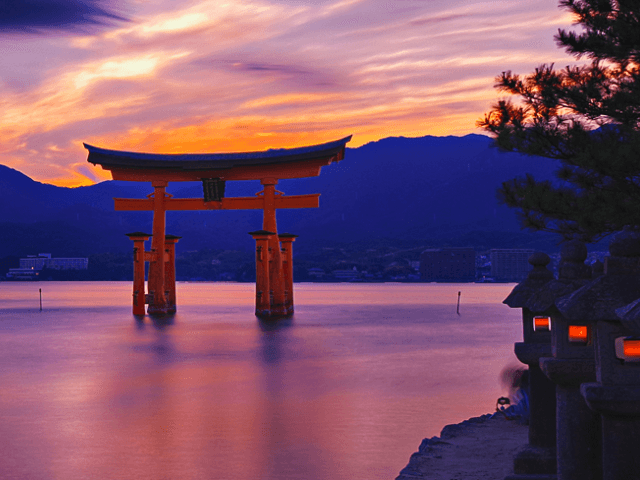 The corridor, known for it's breathtaking vermilion hand rails, stretches into the calm Inland Sea, with the torii gates rising 16 meters above the sea level during the peak of high-tide. The columns are made from camphor with a large 10 meter circumference, and is supported by smaller pillars buried in the seabed. The present torii gates date from 1875, and the shrine was later designated a World Heritage Site by UNESCO in 1996. Out of all the shrines in Japan, Itsukushima Shrine is considered one of the top three along with Matsushima Shrine in Miyagi Prefecture and Ama-no-hashidate in Kyoto.

Visit one of the three most beautiful sights in Japan for yourself during our Cherry Blossom Japan Tours with Hiroshima packages or year-round on a Highlights Japan Tour with Hiroshima to explore the mystic floating torii gates of Miyajima!

Note: The torii gates will be covered while undergoing renovations from June 2019