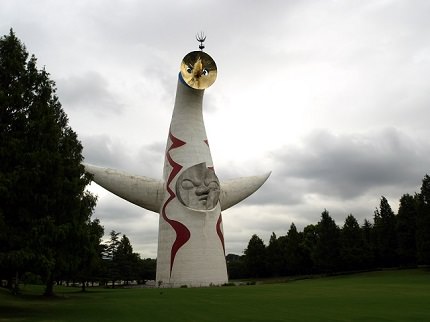 Expo '70 Commemorative Park is a park in Osaka where the Expo '70 world fair was held in 1970. Expo '70, or Osaka Banpaku as it's often referred to, was a world fair with the theme Progress and Harmony for Mankind which included 78 countries. Today that site has become known as Expo '70 Commemorative Park and is a large lawn for the public. The Expo '70 Commemorative Park is home to the National and Cultural Gardens, a Japanese Garden, National Museum of Ethnology, International Institute for Children's Literature Osaka, the Japan Folk Crafts Museum, Osaka Expo '70 Stadium, and also previously was home to the National Museum of Art and Exploland amusement park. While it's been over 30 years since the expo, the Osaka Expo '70 Stadium still sees use from professional and amateur athletes.

Although the expo ended over 40 years ago, the park's symbolic landmark still stands. Called the Tower of the Sun, this 70 meter tall tower has three faces on the front and back (two front, one back) and signifies the past, present, and future of the world. While the interior does feature displays and artwork, it is currently unavailable to the public.

While the next Expo may not feature the Tower of the Sun, you can still explore this testament to peace and harmony with a pre or post stay option during our Cherry Blossom Japan Tours or Anime Vacations in Osaka. You can also create a tailor-made tour to include the destinations you want to see in Tokyo, Osaka, and the rest of Japan!