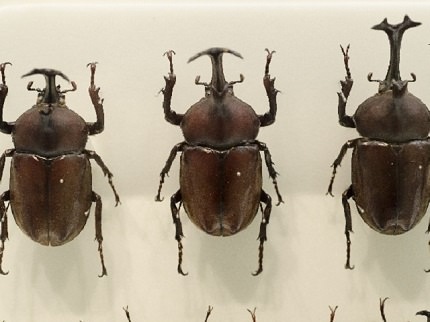 Kabutomushi, Japanese rhinoceros beetles, are popular pets in Japan. Catching kabutomushi is a favorite pastime for boys during the summer. Kabutomushi, along with many other insects, are most abundant during Japan's warm summer months. During family trips to the countryside, young boys will head off into the forests and woods to hunt for these beetles. Boys, sometimes joined by their fathers, will set traps such as smearing honey on tree trunks to lure these beetles out. Kabutomushi can also be bought at department stores, and can cost anywhere from 500 yen to 1000 yen. In some cases, certain breeds of kabutomushi can fetch a large sum of money.

As a popular past-time in Japan, catching Kabutomushi is often seen in young shonen manga and anime, like Assassination Classroom, television ads, and drams alike. Many young kids will have their beetles battle to see who caught the best kabutomushi. In some ways, finding kabutomushi and setting them to battle could be considered an early inspiration to the Pokemon series. In fact, the Pokemon Heracross is based on a kabutomushi!

Although catching kabutomushi are a popular past-time during Japan's summer season, Japan Deluxe Tours advises against catching and bringing one home with you. Although you could purchase them at a department store, you may face some troubles during immigration & custom patrols by bringing back a live insect from a foreign ecosystem into your country.