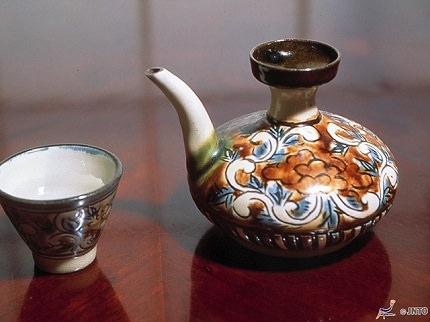 Awamori is an alcoholic beverage from Okinawa made from distilling long grain indica rice. The distilling method was derived from Thailand back in the 15th century and much of the rice used to create awamori today is also imported from Thailand. The beverage is also referred to as shima-zake (island sake) or shima for short by the people of Okinawa. Awamori is typically about 60-86 proof (30-43% alcohol) but lower alcohol level awamori is being produced for its exports to mainland Japan. Some awamori can go up to 120 proof (60% alcohol) and is flammable. Awamori is most commonly enjoyed diluted with water and on ice. It can also be enjoyed straight, on the rocks, or mixed in cocktails.

Awamori was traditionally served in container-cups called kara-kara which had a small, clay marble inside. When the container is empty, the marble would make a kara-kara sound to indicate the drink is done. While this practice isn't as common anymore, some restaurants in Okinawa will still serve Awamori in a kara-kara without the clay marble. Awamori can also be mixed with chili peppers to make koregusu, a type of hot-sauce commonly used in Okinawa cuisine. Awamori is a unique part of Okinawa culture and is a delicious treat to try while in Japan

Intrigued by the traditional Okinawa beverage? Extend your vacation and travel to Okinawa to enjoy authentic Awamori and Okinawa cuisine with koregusu with Japan Deluxe Tours!