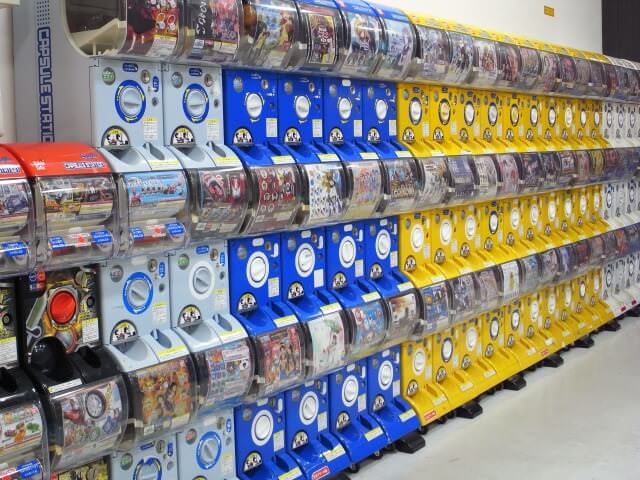 Gacha Gacha Machines, or capsule machines are a variety of vending machines that dispense capsule toys in Japan. The name comes from the sound made as the crank of the vending machine is turned (gacha or gasha). While there are similar vending machines in the United States, one of the key differences is the level of quality in the products. The toys from the Japanese Gachapon are usually made with higher level of detail and attention, with rare figures that can be resold to collectors. The machines usually feature popular characters from anime, manga, or video games, all that come in various sets, making them easy and fun to collect for all ages. Because there are various sets and because the prizes are always random (you aren't able to select which figure you get), some collectors resort to going to other stores in Tokyo's Akihabara and Nakano Broadway or Osaka's Nipponbashi to buy the sets over trying their luck on the machines. Note, because these prizes range from 100-500 Yen per figure (depending on the machine), it could be considered the better choice for collectors to buy the collected sets from re-sellers or stores for a set fee than buying out all the capsules in a machine. The toys are licensed by the studios, making them Official Merchandise that only motivates collectors to complete their sets even more. 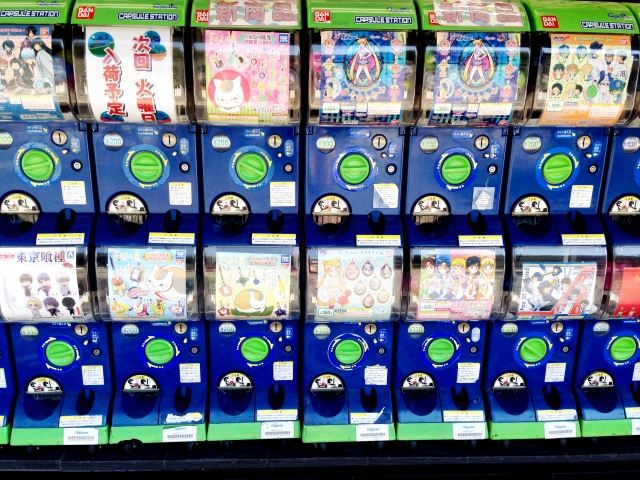 Collecting Gashapon has grown in popularity, resulting in blogs and web-pages dedicated for collectors to help find the figures they're looking for. Comparable to America's Pop Funko figures or Disney Tsum-tsum's, gasha pon can cause quite the stir. If you're ever in Tokyo, Japan Deluxe Tours recommends heading to Akihabara or Gashapon Street at Tokyo Character Street for your gasha pon needs. There are also gasha machines at some airports so you can use up your left over yen before flying home. Since the gacha pons are typically based on trains, animals, and anime characters (like Pokemon or Haikyuu!!), they are a great last-minute gift or stocking stuffer for that anime fan you know back home. If you're an anime fan and want to get a bunch of figurines without breaking the bank, stop by some of the gacha gacha machines in Akihabara during our Anime Japan Tours departing year round!